Secret filming of government-approved exams needed for a visa shows candidates having tests faked for them.

ETS, which sets the exams but does not appoint the invigilators, told Panorama it “does everything it can to detect and prevent” cheating.

Panorama saw candidates for tests set by ETS, one of the largest language testing firms in the world, being replaced by “fake sitters” and having answers read out to them.

For the last year, the programme has been filming undercover, following a network of agents helping people obtain student visa extensions through fraud.

Each year, around 100,000 non-EU students get their visas to stay in the UK extended.

The programme sent non-EU students – who were already in the UK legally – undercover.

They posed as bogus students with poor English, who wanted to remain in the UK to work illegally.

The BBC was told Studentway could get around compulsory English tests, even if applicants spoke no English.

Director Varinder Bajarh said: “Someone else will sit the exam for you. But you will have to have your photo taken there to prove you were present.”

The researcher was told a “guaranteed pass” would cost £500 – about three times the proper fee for the exam.

After paying, she was sent to sit the exam at Eden College International in east London, a government-approved exam centre.

She was set up on a computer to sit the visa application test, called TOEIC, but never actually took the exam.

Instead, each of the 14 candidates had a “fake sitter” who took the spoken and written tests for them.

All the real candidates had to do was wait to have their photograph taken – as proof they were there.

A week later, the undercover applicant returned to the college to sit another, multiple-choice, exam.

This time she had to take it herself, but the invigilator simply read out all the correct answers.

It took the two dozen or so candidates just seven minutes to complete the two-hour exam.

A few days later, the researcher returned to Studentway and was given a TOEIC certificate, showing she had passed.

She had scored highly in all three tests – getting 100% in her spoken English. 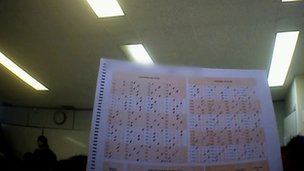 The answers to multiple-choice exams were read out to candidates

Eden College International strongly denies any prior knowledge of, or complicity in, the frauds.

But it said that early last year it investigated allegations against three freelance TOEIC exam invigilators and did not renew their contracts. It said it took swift action to improve invigilation and monitoring.

The TOEIC exam is set and marked by ETS, one of the biggest English language testing companies in the world.

While it does not appoint the invigilators, before its suspension ETS told Panorama it “does everything it can to detect and prevent rare instances of dishonest test administrators or test takers”.

A notice on its website in the UK said that the Home Office has requested ETS to suspend various tests temporarily in the UK related to immigration purposes.

It also said candidates who had appointments to take a test for immigration purposes would be contacted to process a refund.

The government said it had suspended two colleges identified by Panorama and all further English language tests done through ETS in the UK.

Panorama researchers were also sold fake bank details to show they had enough funds to stay in the UK.

Immigration rules mean non-EU students face restrictions on the amount of paid work they can do and need a bank statement to show they can cover their fees and living costs.

One of the agents at Studentway, Vinod Kumar, told a Panorama researcher the agency had a solution.

He said it would use its contacts in India to find “someone else with the same name, whose account and money will be used for you. So when there is need for verification it’s verified for you till you get your visa.”

Mr Kumar was proposing to steal the bank details of someone with the same name as the researcher and pass it off as hers.

Two weeks later she received a bank statement from Studentway that made it appear she had tens of thousands of pounds.

Mr Bajarh denied that Studentway was involved in any fraud. He also said that Mr Kumar had never worked at the agency, but may have used the office without his knowledge.

However, Mr Bajarh is clearly present with Mr Kumar in some of the BBC’s footage inside Studentway’s premises.

Speaking to the BBC Radio 4’s Today programme Home Secretary Theresa May said: “I’m grateful to Panorama for the work they have done in showing this abuse.”

She said the government was taking action to change an immigration system “which was out of control when we inherited it”, and 700 colleges had already been stopped from bringing students in from outside the EU.

Mrs May said she was looking at introducing more face-to-face interviews and called on the educational sector to do more to tackle fraud.

Shadow home secretary Yvette Cooper said: “This investigation shows Theresa May is presiding over a failing immigration system which too often focuses on the wrong thing and where illegal immigration is a growing problem.”